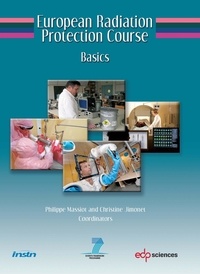 Radiation protection is a major challenge in the industrial applications of ionising radiation, both nuclear and non-nuclear, as well as in other areas such as the medical and research domains. The overall objective of this textbook is to participate to the development of European high-quality scheme and good practices for education and training in radiation protection (RP), coming from the new Council Directive 2013/59/Euratom laying down basic safety standards for protection against the dangers arising from exposure to ionising radiation. These ERPTS (European Radiation Protection Training Scheme) reflects the needs of the Radiation Protection Expert (RPE) and the Radiation Protection Officer (RPO), specifically with respect to the Directive 2013/59/Euratom in all sectors where ionising radiation are applied. To reflect the RPE training scheme, six chapters have been developed in this textbook: Radioactivity and nuclear physics. Interaction of ionising radiation with matter. Dosimetry. Biological effects of ionising radiation. Detection and measurement of ionising radiation. Uses of sources of ionising radiation The result is a homogeneous textbook, dealing with the ERPTS learning outcomes suggested by ENETRAP II project (European Network on Education and Training in RAdiological Protection Il) from the 7th Framework Programme. A cyberbook is also part of the whole training material to develop the concept of "Iearning more" (http://www.rpe-training.eu). The production of this first module "basics" training material, in the combined form of a textbook plus a cyberbook as learning tools, will contribute to facilitate mutual recognition and enhanced mobility of these professionals across the European Union. The authors, all experts in radiation protection and particularly involved in radiation protection training, participated in the realisation of this textbook under the coordination of Philippe Massiot and Christine Jimonet, Researchers-Engineers at the National Institute for Nuclear Science and Technology (INSTN), the education and training institution part of the CEA (French Atomic Energy and alternative energies Commission).