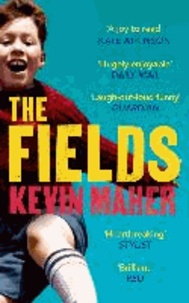 We'd never seen anything like that around our place before. Not right in front of our eyes. You always heard about it, though. Through friends of friends. Or when The Mothers got together for coffee mornings. They'd sit around in a steamy kitchen circle like four mad witches, and dip ginger-snaps into Maxwell House until they went wobbly-warm, and take turns at saying, Jahear about so-and-so, Lord rest his soul, only thirty years old, poor creature?! They were brilliant at it. Scaring the shite out of each other, grinning inside. Jim Finnegan is thirteen years old and life in his world consists of dealing with the helter-skelter intensity of his rumbustious family, taking breakneck bike rides with his best friend, and coveting the local girls from afar - until one day when everything changes. The Fields is an unforgettable story of an extraordinary character: Jim's voice leaps off the page and straight into the reader's heart as he grapples with his unfairly interrupted adolescence.

The Field is a 1990 Irish drama film written and directed by Jim Sheridan and starring Richard Harris, John Hurt, Sean Bean, Brenda Fricker and Tom Berenger. It was adapted from John B. Keane's 1965 play of the same name. The film is set in the early 1930s in a very underdeveloped region of rural Ireland. Plot ...