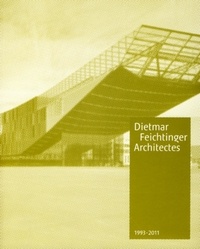 The photos depicting and describing Dietmar Feichtinger's architecture distract our attention from their subject. If they serve to grasp the most apparent qualities - restraint of stroke, daring simplicity of forms, discretion of means - they mask the essential which stems from the situation to which it belongs and reacts as much as it models it. Thus, it appears as a solution to an equation with multiple unknowns, found by integration rather than by addition ? If it a footbridge, is it the progress that has defined it and the resulting pleasure of taking it that has drawn it and determined it : it is established accuracy, its balance, its outline, its details, its mastership. This also applies to a school building, to a company's headquarters or to any other program, as complex as it may be. Geometry, engineering, materials and implementation are dictated by a state which architecture reveals - for the benefit and comfort of those who use it, as well as of those who walk by it. The true working material is more temporal than of geographical nature. To fit to a site requires not only to become part of a configuration, but to understand its genesis, to feel its duration and to grasp its dynamics. Extract of the introduction by Jean-Paul Robert.