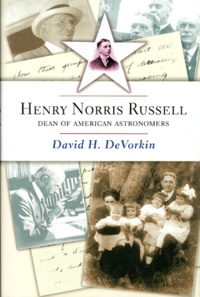 Henry Norris Russell lived in two universes : that of his Presbyterian forebears and that of his science. Sharp-witted and animated by nervous energy, he became one of the most powerful voices in twentieth-century American astronomy, wielding that influence in calculated ways to redefine an entire science. He, more than any American of his generation, worked to turn an observation-centered discipline into a theory-driven pursuit centered on physics. Today professional and amateur astronomers alike know Russell for the Hertzsprung-Russell diagram, the playing field for much of stellar astrophysics, as well as for his work on the evolution of stars and the origin of the solar system. But of far greater importance than his own research, which was truly remarkable in its own right, is Russell's stamp on the field as a whole. Functioning as a "headquarters scientist"- some called him General Russell was an astronomer without a telescope. Yet lie marshaled the data of the Hales and the Pickerings of the world, injected theory into mainstream astronomy, and brought atomic physics to its very core, often sparking controversy along the way. His students at Princeton went on to populate the most prestigious astronomical institutions in the United States, bringing with them Russell's beliefs that astronomy is really astrophysics and that researchers should be theoretically as well as empirically minded. This first-ever book-length biography of the "Dean of American Astronomers" interweaves personal and scientific history to illuminate how Russell's privileged Presbyterian family background, his education at Princeton and Cambridge, and his personal inclinations and attachments both served and were at odds with his campaign to modernize astronomy. This book will be of interest not only to astronomers and historians (particularly those interested in the emergence of astrophysics), but to anyone interested in the process of disciplinary change.